Travels with Donna, Steve and Gus

We arrived at the Sunrise Campground in Bozeman on Monday and were immediately made comfortable with both the campground and with the city. Maryjo, our host at the campground, answered question after question and provided coupons for various stores where we needed things. She told us about the Tuesday evening Farmers’ Market, where we laid in a supply of fresh vegetables and had a good time. There were music, crafts, many food vendors and the entire population of Bozeman out for a fun evening.

On Wednesday night, about 11:00, Jean and Viky Burton arrived at Bozeman Intergalactic Airport. Because our truck is very tall, we sometimes cannot park in underground parking lots, so we arrived a bit early to scope out how to handle the meeting. No problem. All parking was on the surface and was almost completely empty. Walking into the lobby was eerie, as we were the only two macro-life forms extant. The plane arrived early, and our friends greeted us with more energy than we would have thought possible after their long flight. We went back to the campground, retired, and then almost immediately it seemed, we rose to pack up the trailer and depart for Yellowstone National Park. Gus fell in love with both Jean and Viky, and he was thrilled with his new BFF’s. 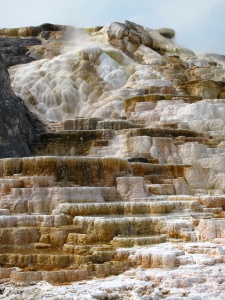 We entered the park through the Roosevelt Gate for the first time in all our trips here. Well, not exactly through the Gate, as the road was under construction, and the Gate was isolated off to one side. We stopped at Mammoth Hot Springs and had a quick walk around, and then got back into the trailer to have lunch in the parking lot. As soon as we got in, a significant thunderstorm hit, with heavy rain and hail. Well, rats. Not a good start. We moved on through the park to Fishing Bridge where we would park the trailer. As soon as we had the trailer connected, another hail storm hit with bigger hail and more wind.

By Friday the weather was clear, and we set out in search of Yogi and BooBoo. The first animal we saw was an elk with an enormous rack of antlers. He was casually munching away with complete disregard to the traffic jam he had created.

Of course, our first stop (after the elk jam) was Old Faithful. It was reliable and lovely. Jean was surprised at how silent the geyser was. She expected a roar. After the geyser eruption, we visited the Old Faithful Lodge, built in 1901 and saved from several fires over the years. It is a very interesting building, constructed from local materials and lovingly maintained and defended.

We stopped by the Lower Fall of the Yellowstone River and then went on to Yellowstone Lake. Viky had brought a slack line that she rigged between two trees near the lake. She demonstrated walking on it, and then got her mother and Stephen up on it.

Viky wanted to see a rodeo, so on Saturday afternoon we drove to Cody, where we saw the gunfight at the Irma Hotel and had dinner. Queen Victoria gave Bill Cody a huge bar for his hotel, so we visited it.

From the hotel, we went to the rodeo arena and entered just in time for the Grand Entry. Viky was not disappointed with the rodeo and really wanted to participate in the barrel racing.

On Sunday we headed for Colter Bay in Grand Teton National Park. The mountains were not at their visual best because we arrived in the afternoon and the sun was behind the range. We decided to get up early on Monday to be able to see the mountains at sunrise. The winds were light, the moon was still in the sky, and the mountains were stunning.

We went back to the trailer and had breakfast and then drove to the boat dock at Jenny Lake, where we cruised across the lake to do some hiking. We all walked (Well, Donna climbed and staggered.) up to Hidden Falls, and then Donna returned to the truck while the rest of the group went on to Inspiration Point. Donna found Respiration Point at the boat dock. Viky made friends with a squirrel. We hope it was as good for the squirrel as it was for Viky.

The hikers were all a bit tired from their efforts, so we had a bit of downtime when we got back to the trailer. Viky had brought a hammock, and she hung it from trees at various campgrounds and had little naps. Colter Bay RV Park is one of our favorite parks. All the sites are in lines and are fairly small, but there are trees between sites, and it has a park-like feel. The last time we were here with Christopher and Michael, a short microburst storm brought down several pine trees that crushed some vehicles and RV’s. All was calm this time.

We stopped at the Snake River Overlook on our way to Jackson to view and photograph the scene made famous by Ansel Adams.

Then we spent a happy couple of hours poking around Jackson and having lunch at the Snake River Brewery before departing for Rock Springs, WY. We hated to leave Grand Teton and Yellowstone Parks behind, but there are still a lot of places to see, people to fry, etc. So we hit the road again.

We never did see Yogi and BooBoo.  We did see a wolf in Yellowstone, and a fox showed up at the shower block in Grand Teton.

As a side note, on August 31, President Obama changed the name of Mt. McKinley to Denali.

One thought on “Yellowstone and Grand Teton National Parks”